A Calgary imam will start a 48-hour hunger strike Friday evening to protest the beheading of an American journalist in Iraq this week by ISIS.

Imam Syed Soharwardy, founder of Muslims Against Terrorism and the Islamic Supreme Council of Canada, says he wants to draw attention to the actions of ISIS — a group of militants fighting for an Islamic state in the Middle East whose violent activities show they are not Muslims.

“The atrocity that is being carried out by ISIS is quite horrible. It’s quite inhumane. It’s terrorism and in Canada they have successfully recruited more than 100 people to go and fight for them in Iraq and Syria,” Soharwardy said.

“I want to create awareness about the nature of their work — they are using Islam, they are quoting Qur’an, they look like Muslims, they pray like Muslims but they are not Muslim. They are deviant people, and they are doing exactly everything which goes against Islam.”

Soharwardy said he wants to make sure Muslim youth know that ISIS militants are not Muslims because many are being brainwashed by the terror group and other radical leaders. 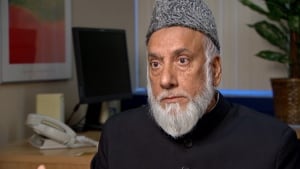 Imam Syed Soharwardy will begin a 48-hour hunger strike on Friday night to protest thebeheading of an American journalist in Iraq this week by the militant jihadist group ISIS. (CBC)

He said he also wants to reach out to Canadians to show that Muslims condemn the violence being committed by the terror group in northern Iraq and Syria, including the recent beheading of American journalist James Foley.

‘They are deviant people, and they are doing exactly everything which goes against Islam.’– Imam Syed Soharwardy of Calgary

Soharwardy says he wants Muslim youth considering going overseas to fight with ISIS to reach out to him.

He also wants to see a united Muslim stand against ISIS, and is calling for Muslim leaders around the world to isolate and condemn ISIS militants from the Muslim community.