You are at:Home»Current Affairs»The Original and the First Environmental Protection Agency
By ISCC on December 12, 2014 Current Affairs, Publications

After the dawn prayers, I was sitting in the Masjid Al Nabawi Sharif (the Grand Mosque in the city of Madinah, Saudi Arabia) and watching the most beautiful scene on earth – the Green Dome (Gunbad-e-Khadhra) at the sunrise.  My eyes were filled with joyful tears and my heart was busy thanking Allah for this opportunity. Suddenly, a thought distracted me; The Greenpeace movement came to my mind. I paused for a second and looked at the green dome with quite a different perspective….

While I was watching the glorious green dome of Masjid Al Nabawi, I started asking questions to myself. Why the human society, especially the western world, does not know much about the first and the original environmental and conservation movement on earth? This movement was started 1400 years ago by God’s (Allah) last messenger, Muhammad (peace be upon him). No one before him established such comprehensive guidelines for resource conservation and environment protection.  Had the humans followed him (Peace be upon him), they would have never faced the current environmental disasters.

Currently, around the world several organizations such as UNO, Greenpeace, Sierra club and other non governmental and government organizations / agencies are working to protect the environment. These agencies and organizations have now realized that the overwhelming industrialization of the world and misguided principles of human development have caused serious damages to the environment. They are now trying to control this damage. They are now setting up the standards such as Kyoto agreement to minimize the further environmental damage.

1400 years ago when no one would have thought the importance of environmental protection, Prophet Muhammad (peace be upon him) gave the world the guiding principles for keeping the healthy environment and conserving the world resources. Islam’s Holy book, Qur’an says;

But man’s overwhelming industrialization of earth is damaging that balance and proportions. What right does man have to change this balance and destroy Allah’s creation?

Just like humans all other things are Allah’s creation. These things know Allah and remember Him. What right does man have to destroy the animals, birds, trees, mountains, atmosphere, climate, etc. by producing pollutants in the environment?

Prophet Muhammad (Peace be upon him) said;

Allah granted human beings stewardship (KHILAFAH) on the earth. Therefore, humans are responsible for implementing Allah’s instructions, laws and regulations on earth.  Humans do not own earth, or things on earth. They supposed to manage the resources on earth under the laws and regulations prescribed by the OWNER i.e. Allah. Humans must take every precaution to ensure the interests and rights of all others creatures of Allah as they are equal partners on earth. There must not be any abuse to the environment by humans.

Damage and destruction in any shape or form has been forbidden in Islam.

Islam proactively stops the damage before it starts. Prophet Muhammad (peace be upon him) provided the guidelines for handling all forms of wastes and pollutants in order to avoid the environmental damages.

This means biological, chemicals, nuclear wastes, pesticides, herbicides are forbidden in Islam. All these pollutants cause damage to the environment. The emissions from factories and automobiles must be controlled and properly handled.

The Merciful Prophet Muhammad (peace be upon him) said;

The universal and the most visionary Prophet Muhammad (peace be upon him) forbade;

Muslims, around the world, have an obligation to protect the environment and conserve resources by joining the original Environmental Protection Agency on earth founded by Prophet Muhammad (peace be upon him). In other words, just believing is not enough, do some thing about it. Protect the environment from all forms of corruptions and pollutants.

It is in everyone’s interest, Muslims and non Muslims, to follow the most proactive and the pioneer of environmental protection movement, the final Messenger of Allah, Muhammad (peace be upon him). May we get some wisdom. Amen.

Those who conserve in this world will get it back, in abundance, in the Heavens. 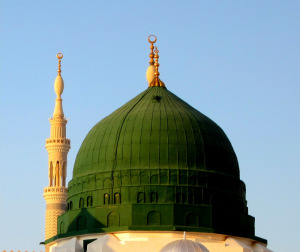